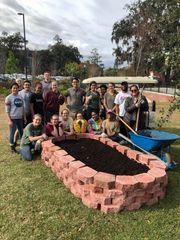 Nearly 10 years after its inception, Sustainable Campus continues to expand sustainability at Florida State University. This past Saturday, Jan. 12, the Seminole Organic Garden added eight new beds, and recently, Food Recovery Network expanded to include recoveries from the C-Stores, The Grid and Garnet & Go.

Sustainable Campus was formed at FSU in 2010, but the campus started sustainability efforts as far back as 2004. What started out as a Strategic Planning Group has grown to become a full functioning office that works in the Facilities department.

Elizabeth Swiman first came to Florida State in 2007. She had always planned to work in sustainability, but began her career in Student Affairs. Three years later, she transitioned into her role as director of Sustainable Campus.

“There’s always more work to be done, but we have come a very long way,” said Swiman. “We are striving very hard to be great.”

“These programs, the office and the full time staff positions wouldn’t exist if it wasn’t for the work all the students have done,” Swiman said. "Students created this office; students advocated for this office."

Food Recovery Network, a Sustainable Campus program that began in 2014, recovers excess food from the Figg Player’s Dining Room to redistribute to community partners such as the Kearney Center, CARE Tallahassee, Westgate Community and Hope Community.

Recovering over 50,000 pounds of food since its inception, Food Recovery Network increased its efforts this past fall to include weekly pick-ups from the C-Stores, which include the Grid and Garnet & Go.

Seminole Organic Garden has recently expanded the garden to include eight more beds for a total of 30 beds. Part of this funding for the expansion came from a bill passed in the Student Senate this past April.

This bill allocated $1,081.98 from Senate Projects, a discretionary Student Senate fund that can be used for various projects around campus, to Seminole Organic Garden. Senator Rachel Glanton, sponsor of the bill, helped with the garden build and expressed excitement at seeing Senate money working in a real way on campus.

“We hope that expanding outwards will gain the attention of people passing by and make us more noticeable, because people are still very unaware of what this area is,” said Alex Basili, Seminole Organic Garden manager.

Basili shared that the main goal behind this build is to get more students involved.

The success of the programs on campus has lead to Swiman’s recognition as one of the Teachers Insurance and Annuity Association of America’s 100 Difference Makers. As part of this award, Swiman received a ten thousand dollar donation to a charity of her choice. Swiman chose Sustainable Campus’ Green Fund.

The Florida State University Green Fund provides grants to students to fund ideas related to sustainability on campus. Some of the funds past use have gone to projects such as solar panel umbrellas, the Food For Thought Pantry refrigerator and getting eFLIPs for the Marching Chiefs,.

Looking towards the future of sustainability at FSU, Swiman believes that it’s a challenge to know exactly what the next big trend for sustainability will be, but that is not necessarily a bad thing.

“Sustainability is still thought of as this thing that needs to be adopted,” Swiman said. “So when do we cross over from being a ‘thing’ to being a part of the culture?”

The Seminole Organic Garden is located across from the Marching Chiefs field. If you are interested in helping out in the garden, work days begin this Monday 12-2 p.m. Monday work days will be held weekly at that time, and 3-5 p.m. on Thursdays. The garden beds can be rented to individuals or registered student organizations.