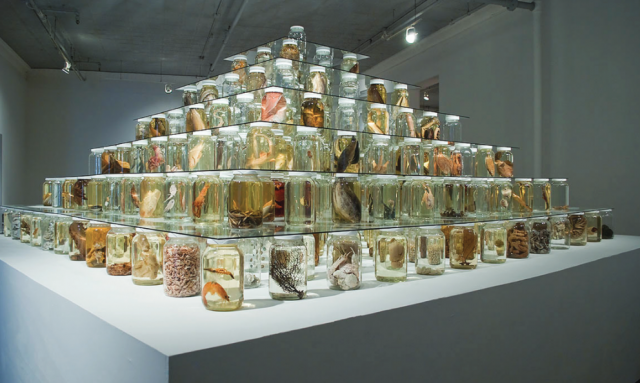 By: Naira Diptee, Sustainable Campus Graphic Designer and Double Major in Studio Art & Theatre with a minor in Art History

When I first saw Brandon Ballengée’s exhibition Le Sang Noir at The Florida State University Museum of Fine Arts, I immediately admired the way that it was able to make the research and advocacy surrounding the 2010 BP oil spill accessible to the community not just through the artwork presented, but through the event itself. That Saturday afternoon, the gallery was bustling with families, children, students, groups of friends, and individuals who wouldn’t have otherwise had the opportunity to immerse themselves in the environmental and social impacts of the oil spill and become aware of the intersections between the visual arts and science. The exhibition served as an entry point for people of all ages to gain an interest in environmental science and advocacy, while also proving the importance of the arts to society as a way for important topics to get into popular discourse. This reminds me of a quote by astrophysicist and science communicator Neil deGrasse Tyson in a 2018 radio show interview where he says, "when Science is reached for by the artists ... and science becomes part of the artist's muse … then science becomes mainstream. And if science isn't mainstream, people think they can ignore it and they say "oh, that's just a class that I took." But Science is everywhere ... and it's in everything we do ... and it's in decisions we're going to have to make for the future of our health, our wealth, and our security going forward.” As the fate of our environment turns increasingly precarious, combining science and justice with the arts and pop culture is extremely important moving forward as a society. I wondered, as both an artist and biologist, whether for Ballengée he felt like his artwork was a medium for explaining his research, or if his research serves as inspiration for his artwork. In the artist’s notes for the largest piece in the exhibition, Collapse, he answers this by writing, “Although my work is inspired by scientific study, it is fine art and not meant to be read as a scientific visualization.” He also writes about what he believes to be the differences in expression through science versus the arts saying, “In my scientific studies I must stay objective and let the results speak for themselves, yet through making art I am able to explore the emotional physiological complexity of working directly in degraded landscapes with impacted organisms.” As an art student myself, I couldn’t help but marvel at the formal elements of the artworks whose emotional impact could be easily felt if they were not readily understood. The pyramid shape of Collapse recalls many iconographic symbols such as the Egyptian pyramids, a mark of empire that echoes the power of the oil industry. In the artist’s notes it says that the glass specimen jars recall glass coffins, the victims of which were used to build up this imperious industry. The meticulous positioning of each jar into the pyramid formation is reflective of the fragility of the ecosystem; if one jar were to be removed, all of them would come crashing down.